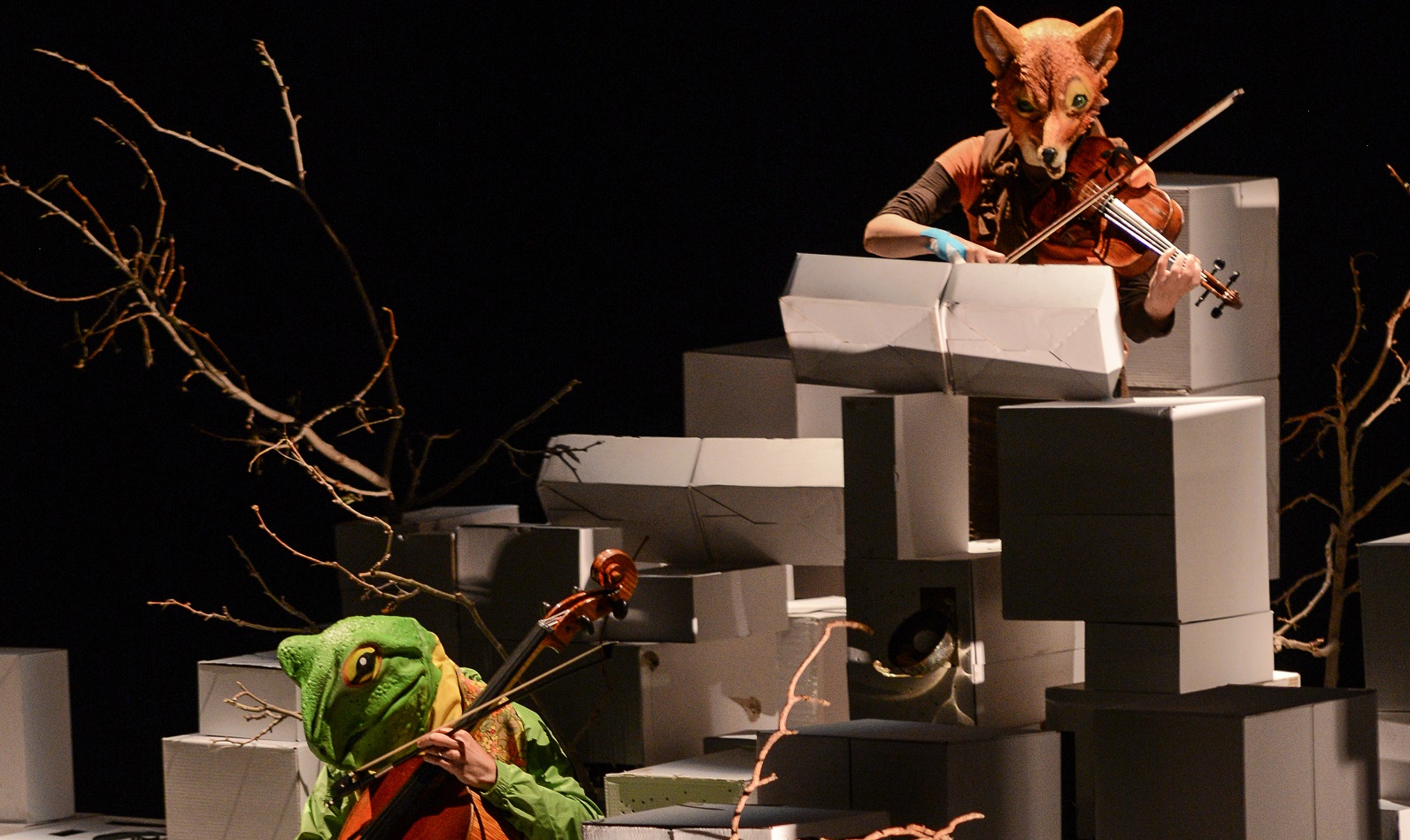 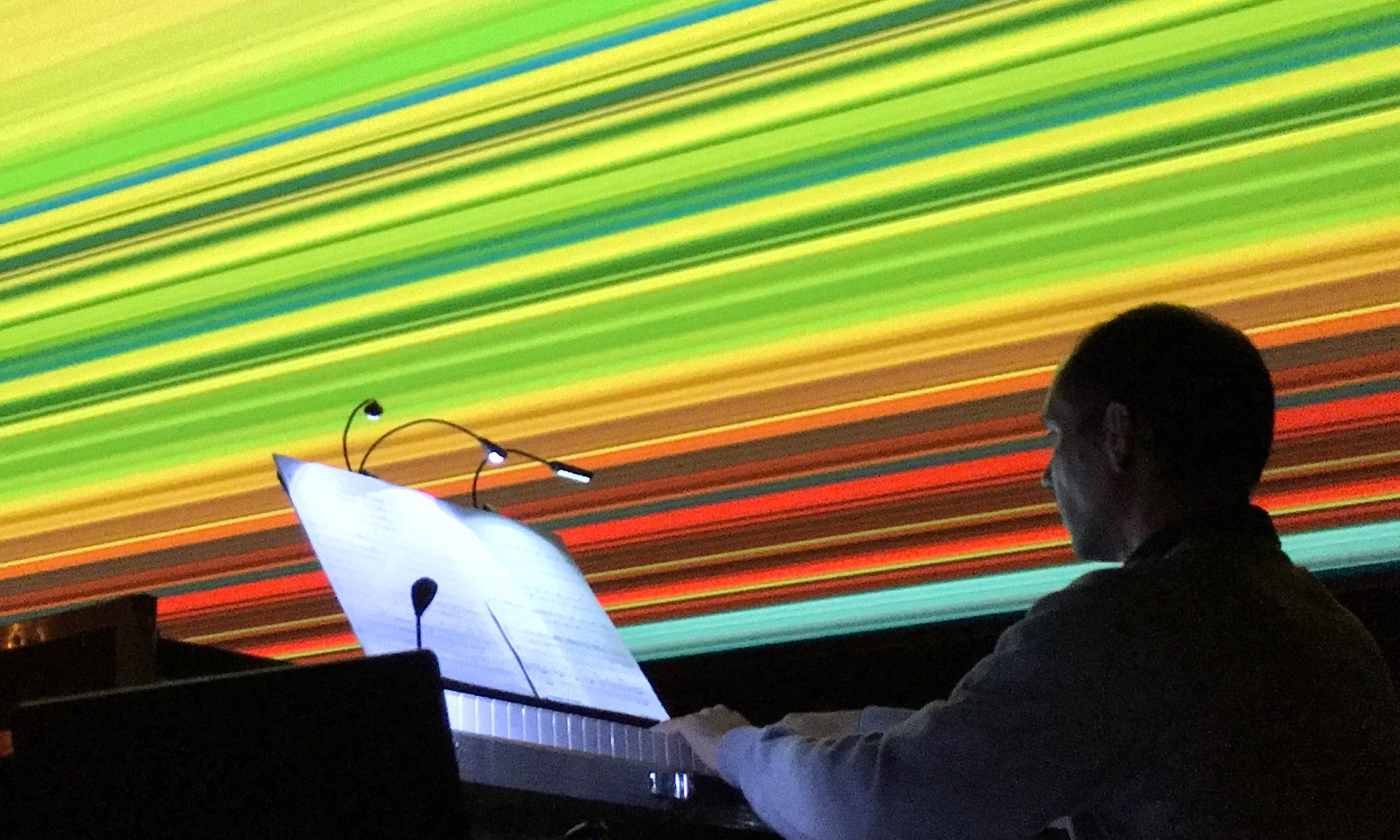 On entering the Galerie the audience beholds a strange city built of boxes, inhabited by musicians – half human, half animal. There is much to discover while strolling through the labyrith of this city. Interiors can be seen as if through windows in cardboard boxes containing enigmatic objects, traces of a hidden existence. Viewers occasionally come across short texts on slips of paper; sometimes they encounter a dancer. The human-animals create an alien, fragile music whose live electronic echo fills the space.

The texts come from a collection of bizarre and eccentric portraits, published by the Italo-Argentine writer Juan Rodolfo Wilcock in 1972, in which cannibalistic lovers, accident-prone gods, unemployed angels or incessantly chattering solo entertainers defend their quixotic ways of life.

Das Stereoskop der Einzelgänger is primarily concerned with the visitors themselves, their listening, perception and memory. It leads them through a curious landscape in which they will individually direct their attention to a wide range of phenomena and even change roles several times.Through theatre, installation and music the Argentine composer Ana Maria Rodriguez, the Franco-German director Ingrid von Wantoch Rekowski and the American stage designer Fred Pommerehn create a disquieting and unsettling world with the Ensemble KNM from Berlin.

In the second part of the evening a digitally and musically animated painting in the Orangerie responds to the music-theatrical installation in the Galerie. Following an idea by Gerhard Richter, the film-maker Corinna Belz and the Cologne-based composer Marcus Schmickler have developed the musical and filmic work Richters Patterns that can be seen here for the first time as an installation.

The audience is situated between an expansive projection on the one side and the musicians of the Ensemble Musikfabrik on the other. With the aid of a specially developed software, photographed details of an abstract painting by Gerhard Richter were transformed into patterns and montaged into a film through cutting, reflection and replication. Over a good half hour these patterns transform almost imperceptibly into colourful stripes, as if connecting two poles of Gerhard Richter’s oeuvre: his large oil paintings produced with a doctor blade and his famous colour-field panels and ‘strips’.

Marcus Schmickler reinforces the effect of the film by adopting the process of fragmentation and reproduction in his music. Different scales are repeated and mirrored; massive chords fold into one another; microtonal lines and motifs emerge and make a spectrum of overtones audible. Film and music form an indivisible unity in which the dynamics of optical effect and musical perception interpenetrate.

TIP: For a successful evening we suggest a ticket combination with the freitagsküche - enjoy a dinner together with the artists and the festival team in the Spiegelzelt after the performance on 06.05. at 22:00! Tickets 15 Euro (1 meal, excl. drinks)

Richters Patterns is a musical installation for 18 Musizierende and elektronics and the film of the same name by Corinna Belz based on an idea of Gerhard Richter, montage by Rudi Heinen, produced in Campus Musikfabrik, sponsored by Kunststiftung NRW, commition by KölnMusik